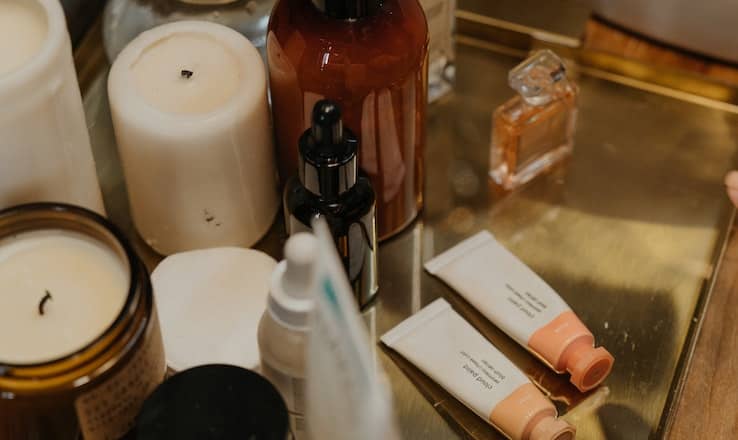 Affiliate Disclosure: I receive a small commission for purchases made via affiliate links.

Hydroxy acids (HAs) are organic acids which contain one or more hydroxyl groups attached to the carbon chain of these molecules. HAs are often found in nature (for example, in fruits), but can also be synthesized through chemical methods. Hydroxy acids have massively transformed skin care!

So one day you woke up and realised your youthful glow was no longer there….your skin appears dull and tired. As we age our epidermis (top layer of the skin) gets thicker. Skin turnover slows down and as a result we see an accumulation of skin cells on the surface of our skin. This build up makes it harder for the skin to reflect light, hence the dull appearance.

The purposes of hydroxy acids in general are two-fold:

To increase cell turnover and get that glowing skin back hydroxy acids such as glycolic acid, salicylic acid or lactic acid are our saviours! Topical acids have also been show to stimulate fibroblasts to produce collagen.

Secondly, they are commonly used for the treatment of acne/clogged pores.

Note: the aromatic ring in SA changes the properties of this molecule. SA doesn’t function quite the same as other BHAs (although often described as a BHA, whether salicylic acid is technically one is debatable).

Should I use AHAs or BHAs (or neither)?

The exact mechanism of these water-soluble acids is still unknown. The most widely accepted theory is that AHAs remove calcium ions from epidermal cell adhesions by chelation. As a result there is weakening of the intercellular adhesions. This produces an exfoliating effect by causing the shedding and flaking of dead and dry cells.

Glycolic acid is the smallest AHA and thus has maximum skin penetration and therefore maximum impact on the cell turn-over rate.

In addition, the reduction of calcium ions promote further cell growth while slowing cell differentiation, thereby lessening the appearance of wrinkles. It is thought that AHAs may also promote increased gene expression of collagen and hyaluronic acid in the dermis and epidermis.

AHAs, such as glycolic acid and lactic acid have been reported to be effective in treating hyperpigmentation issues such as melasma, solar lentigines, and postinflammatory hyperpigmentation. This is proposed to occur due to epidermal remodelling and accelerated desquamation, resulting in pigment dispersion. There is also evidence these acids may work to reduce hyperpigmentation by inhibiting melanin formation in melanocytes.

Whilst BHAs still exfoliate your skin (I’d still go for AHAs if this is your primary goal), their oil-soluble nature allows them to easily penetrate pores and dissolve oily blockages that clog them, they are thus suitable for those with oily skin/acne. SA is a very popular BHA for the treatment of spots; its oil-loving self, combined with its antibacterial and anti-inflammatory properties (helping to decrease the redness that comes with spots) make it easy to understand why!

Numerous clinical studies show that the use of AHAs increases skin photosensitivity. However, this increased photosensitivity is reversed upon terminating their use. In other words, be extra meticulous with sunscreen when using AHAs. On the otherhand, SA has been reported to be photoprotective in several studies. But further investigation is required, so it would still be wise to layer up the sunscreen.

Whilst the combination of both AHAs and BHAs can be more irritating, it can be done! If you feel like you would benefit from the effects of both a AHA and BHA, go for it. If you are going to do this then trying a product that already contains both AHA and BHA is your best bet at avoiding irritation, rather than combining them yourself separately.

If you’re just starting off and you have particularly sensitive skin, then The Ordinary’s 5% lactic acid (with hyaluronic acid) is one of the mildest formulas out there with only 5% AHA.

This exfoliant is perfect for those who prefer a more minimalistic routine; the solution contains only lactic acid and purified water! No unnecessary extras.

This serum contains 10% lactic acid as well as squalane (a very effective emollient – emollients act as occlusive agents, i.e they coat the skin and act as a seal, preventing water loss).

This is a mild 7% glycolic acid treatment which also contains 2% niacinamide, panthenol and hyaluronic acid.

This is a very strong exfoliant and I would not recommend this for beginners. If your skin can already tolerate AHAs then this product is something you might try once per week.

This cleanser improves appearance of skin texture, tone, and smoothness whilst thoroughly cleansing and exfoliating the skin.

This cleanser contains salicylic, lactic and glycolic acid which polishes away dull, dry skin without irritation.

Glycolic acid (AHA), lactic acid (AHA), and salicylic acid (BHA) are the most common examples of hydroxy acids used in skincare (of course, there are more).

AHAs are good for increased cell turnover, hyperpigmentation and fine lines and wrinkles.

BHAs are also good for exfoliation but also for acne/spots.

AHAs cause increased photosensitivity, make sure to wear sunscreen (of course you should be doing this anyway, even with the use of BHAs!).